Feminism in the proper sense of the term is uncompromising in its opposition to any form of masculine assertiveness. The attitudes of men to women in terms of masculine superiority over women and the exercise of the right to protect women as well as think for them without their assent help to create feminism. Womanism precedes feminism in its external manifestation. It advocates a state of being that is natural to women. Womanism “being a woman” is derived from two distinct viewpoints namely traditionalism and modernism. Traditional womanism derives from the customs of people and these customs, as have been discussed earlier, assign specific roles, attitudes and decorum to the woman. Modern womanism expects mutual understanding between men and women. The specific roles assigned to both sexes are of equal importance in the strengthening of the alliance between them. It should progress despite the differences of opinion between the two partners. Modern womanism asks the woman to assert her presence, exercise her rights and to legitimize her aspirations through the usage of intelligence, wit, patience and tolerance.

Desai’s characters like Maya and Monisha escape from the struggles of existence by choosing the path of death and violence as a result of neurosis. But her matured characters like Sita and Bim face alienation and conflict but they compromise with life  and these characters show that Desai is not for militant feminism but for womanism. Sita becomes the representative of modern woman who is a helpless victim caught between illusion and reality. Sita realises that all reality is existence.    This discovery becomes her knowledge but it does not resolve her anxiety. She learns a lesson to say ‘yes’ because there would be no other alternative but to be crushed. In Sita’s revolt and her subsequent reconciliation, Anita Desai reveals a strong assimilation of the modern and the traditional outlook of Indian woman. She will be able to arrive at a synthesis if only she could connect tradition and modernity, new demands and old values. 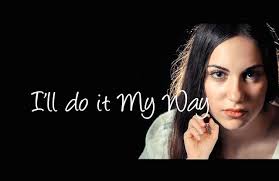