The decision was the outcome of a quest. A spiritual quest.  Although it was made on the spur of the moment, I felt I had a tale to tell and I wanted to give life to it. The decision was also born out of the firm conviction that readers would benefit from reading about the migrant experiences of an individual, which could be the collective voice of migrants with similar experiences.

If I were to summarise my book in one to three sentences to an unfamiliar person, I would commence by pointing out that literature is a mirror of life and that my book is about resilience. It is about challenges the protagonist faces, both in her professional and in her personal life. It is about creative force. It is about a new beginning.

The overall theme of the book is human experience. The protagonist attains growth and maturation as a result of her experiences, challenges and disappointments, which coerce her to take a journey into the interior and she resurfaces with the discovery of her new self.

The setting of the book  is Sydney and a city in the Indian state of Tamilnadu, Coimbatore.  Each character is important to the story. Neha is the central character of the book besides other minor characters. Each character portrait has a unique significance, a distinctive voice and represents an idea. For instance, Neha’s importance stems from the fact that she breathes life in to the book; she is the voice of female migrants and she represents the idea of resilience whereas the value of character John is evident in the book when he becomes instrumental in  terminating an unproductive relationship. He is the voice of a child who is affected by a dysfunctional family and he represents the idea of negative influence of technology on students’ education.

Real life experiences (that are not necessarily autobiographical) have been presented with utmost sincereity and genuine emotion. Hence I am confident that the book will appeal to the emotions of a wide range of readers. I have included a passage to gain your consensus –

A dagger descended into her heavy chest. A tear stung her eye before it rolled down her cheek. A lump in her throat stole her words. A proud woman was reborn. Redeeming the remnants of her lost dignity, she quietly stretched her hand out for the documents. Life ebbed out of her as she scrawled her signature on the freshly printed divorce papers. The deed was done.

The book is relevant in today’s society in many ways. The use of mind control chips by Governments to place their employees under twenty-four-hour surveillance has been touched upon. Migrants come to the land of opportunities with myriad dreams in their hearts and they are successful in some ways but they also lose a lot in trying to make their dreams come true. They usually end up paying a prize for their achievements and it could be of any kind. As the central character is a woman, the book is written from a woman’s perspective. The challenges faced by racially diverse educators in the teaching profession, which is a sensitive topic, and the changing identities of students who fail to value education as it used to be, a few years ago, has been conveyed in the book in subtle ways. The book also provides a  glimpse into the interference of technology with student learning. It also touches upon relevant issues in society like domestic violence leading to an ADVO,  break ins and the market for stolen goods.

This realistic fiction presents real life experiences from a very different angle. The style of writing is an amalgamation of essayist-style and that of a prose fiction author. It has semblance to a memoir but the third person narration used proves otherwise.

If one were to ask me what I would like my readers to take from my writing, I  would want them to be politically and socially aware of the changes in the society. Despite all odds, I want my readers to develop resilience in themselves. Once they are able to bounce back they are on their pathway to success as nothing or no one or no force can stop them from achieving their aspirations. 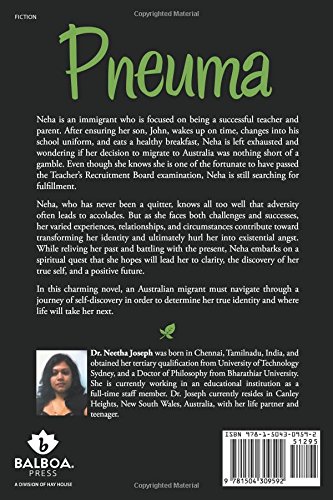