My recent addiction to Hindi movies on Netflix stems from its ability to surprise me as it challenges stereotypical notions or preconceptions.  Predictable scenarios, irrelevant emotional-laden scenes and fairy-tale ending culminating in an extravagant wedding have gone with the wind. This afternoon I was viewing ‘Jab Harry met Sejal’ when I realised that, unlike Hindi films from yesteryears, the hero did not run with his heart in his mouth to stop the heroine from exiting his life via a plane or a train influenced by his last minute realisation that he was in love. On the contrary, they chose different destinations in life and after few months of separation realise the cause for the unexplained  void each experiences and reunite later, retaining their maturity and individuality in their relationship. South Indian films are known for its realistic portrayal of people and their life however, it is refreshing to find that Hindi films are stepping up as well.

Films with unpredictable endings such as ‘Queen’, ‘Calendar Girls’ ‘Angry Goddesses’ ‘Piku’, ‘Dear Zindagi’, ‘Madras Cafe’ etc. are welcoming digressions from the regular Bollywood masala. On reflection, what I could not help observing about these films are that hero worship has been sacrificed at the altar of realism and in films like ‘Dirty Picture’, ‘Pink’ etc. besides the afore-mentioned, women are portrayed as liberated individuals, who are not ashamed to reveal their sensuality or other eccentricities, and as epitome of strength who prefer to chose career over marriage as opposed to the convictions ‘Man for the field and woman for the hearth’ entertained by the 17th century communities. Shackles of societal restrictions have been shattered with femme fatale entertaining multiple partners and with Indian women boldly entering into live-in relationships with or without parental consent thereby not disguising their feminist assertions. 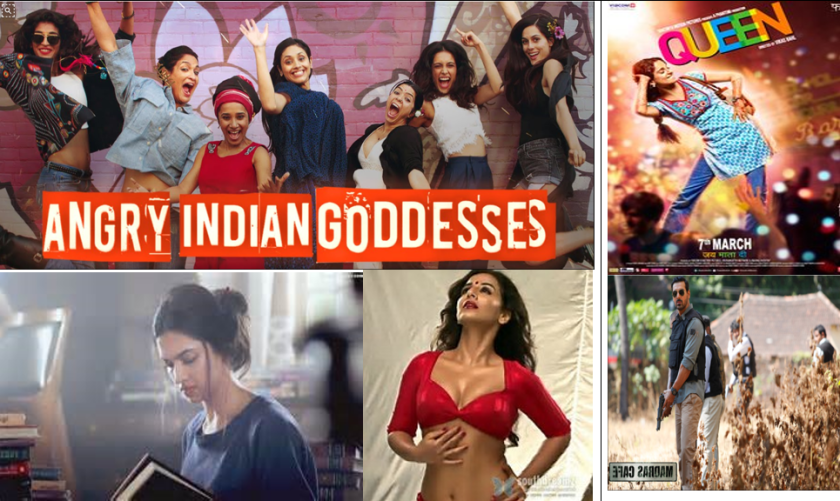