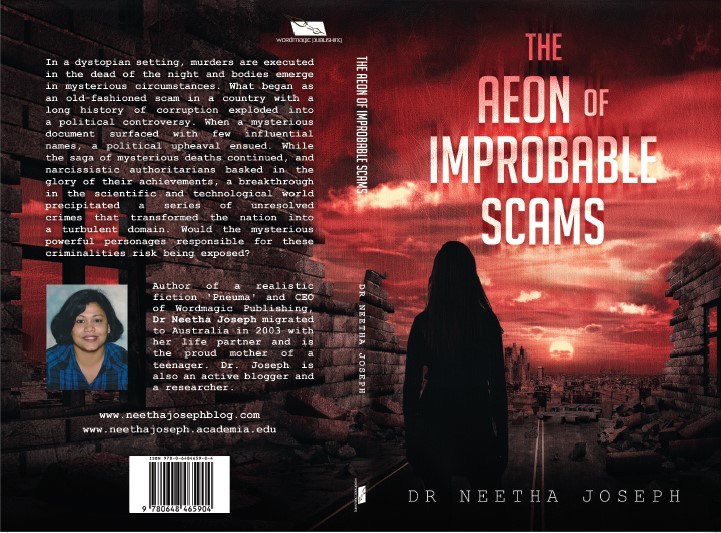 Dan Rutherford was searching for apposite words to finish an urgent report when the telephone rang. He ignored the call and proceeded to the final paragraph of his report satisfied with his efforts. He had just saved it on to his portable hard drive when the phone buzzed a second time.

‘Hullo, I am Natalie from Microsoft. How are you?’

‘Your computer is at risk as there are harmful files, which contain virus. Ordinary anti-virus software cannot remove it,’ said Natalie whose mesmerising voice had an enthralling effect on him.

‘If you provide me access to your computer, our tech support team can remove the danger within no time,’ continued Natalie.

‘How much is this going to cost me?’ asked Dan becoming a little impatient as he had few pending files to take care of.

‘If you are logged on now, I can take you through a few steps, which will give me access to your computer, and your system will have the upgraded version of our software free of cost,’ reassured Natalie.

Dan followed her instructions only to gasp in disbelief at the errors the system showed. He could see Natalie controlling his PC as he followed the movements of another mouse on his screen, eradicating the dangers one by one while multiple windows opened and closed. A few minutes later the phone rang again. Natalie was on the line assuring him she had fixed all the problems and that he would not have any more issues.

‘Have a wonderful evening,’ said Natalie before she hung up.

Dan resumed his work as he had many confidential files on his system he had to copy on to his drive for safe keeping and future reference. When he had finished, he deleted those files from his system and restarted the computer as per the prompt. He rose to make a quick cup of coffee and when he returned with a steaming mug, he found his computer dead. His efforts to revive the PC proved futile as the battery did not charge and he cursed himself for his stupidity. He should not have given access to his files when he had sworn to secrecy. He checked his mobile and realised that he would have to wait till the next day to get it repaired.

Dan stepped out of the study room into the balcony sipping the beverage languidly while drinking in the beauty of auburn sunset. He found himself unstiffening as he gazed at the velvety ceiling that draped the city. As darkness, cloaked in silence, crept on the purple stained skies, Dan withdrew his gaze and sought the solace of the well-lit cosy chamber.

Few kilometres away, on the thirteenth floor of a skyscraper overlooking the sun-dazzled Harbour Bridge and the shimmering waters decked with yachts, boats and ferries, a team of young IT professionals were celebrating their recent success in hacking. They did it more for sport than any other ulterior motives and, also, to improve the efficiency of a new hackerproof software manufactured by the company they represented, Hewitt & Paschal.

‘Any luck? Bank Account details or passwords?’ asked the Project Manager Greg, a nerdy, brawny gentleman in his mid-twenties.

‘A few important transactions, encrypted documents, password protected PDF files and family photos, etc. Still searching. Give me a few minutes, will ya?’ drawled Natalie without taking her eyes off the computer screen; a close-cropped brunette in her early twenties, attired in a white shirt with a few buttons undone and a black tube skirt.

‘Take all the time you need,’ said Greg tugging at the knot of his tie to loosen it as the heat was stifling him. The air conditioner needed replacement, he thought, as he was scanning the picturesque view through the French windows of the office in Milson’s Point.

‘Holy Shit! You will not believe this. I am looking at a spreadsheet listing the names of prominent banks and against each someone has recorded an influential Senator’s or MP’s name,’ exclaimed Natalie whose animated regular features betrayed her excitement.

Before she could bat an eyelid, heads gathered around her computer and greedy eyes devoured the information in stunned silence.

Greg was the first to break the silence, ‘That sure looks interesting. I think we have a lead on something huge here.’

‘Check if it has anything to do with the transactions you mentioned earlier,’ stated Dylan who was a recent addition to the team.

The atmosphere became tense as Natalie’s fingers generated a rhythmic pattern of clicks and clacks as she opened and closed several documents containing bank transactions while the rest of the team waited for affirmation in anticipation. When she looked up from the screen, she could not help laugh at the posture of her fellow team members, who held their breath like motionless buskers.

Natalie threw a thumb up at her colleagues confirming the connection between the list and the transactions via cheques made out to property investment companies included in the spreadsheet.

‘Politicians’ interest in properties or property investment companies is not something we do not know. We know they own properties but what we do not know is how many are unaccounted for. I have a strange feeling that there are missing pieces to this huge jigsaw puzzle,’ reasoned Sean, one of the experienced Network Programmers of the company.

‘If only we could figure out the codes for those encrypted documents, we would know for sure if it involves the listed people in any scam or fraudulent schemes,’ remarked Greg.

‘That wouldn’t be a problem for programmers like us. Most of us are well-versed in C++ and Java. For an expert like Brian, decrypting the documents would be a cakewalk,’ said Dylan with confidence.

‘He is on his break. He will be back soon,’ added Natalie flashing a quick grin.

‘Everybody back to work. We must stick to our deadlines. Project Atwood is due next week,’ said Greg in a dismissive tone.

A shuffle of feet, dragging of chairs and in a few seconds, silence descended on the cabins except for the click-clack of computer keys.

When Brian returned from his break, Natalie gestured to him and briefed him on the occurrences during his absence, showed him the encrypted documents and instructed him to decrypt them after he had completed the project deliverable. Brian nodded his head as usual and Natalie thanked the stars for having assigned him as her teammate as they had a fantastic work relationship. It was unexplainable how often Brian would present the work in the way she wanted even though she had not discussed it with him or provided verbal instructions.

The Project team functioned without further distractions till lunch break. At 1:00 pm the staff made their way to their favourite café in the food court where amidst friendly banter and laughter they wolfed away their lunch orders. Few smokers made their way to the balconies to enjoy the view while puffing away their cigarettes. Natalie’s friends’ circle extended beyond IT professionals to designers, stylists, boutique owners and Retail managers. Between conversations when she searched for Brian in the food court, she could not find him. She knew he had stayed back to decrypt the documents and could not suppress the smile that sprang to her lips.

A few minutes before the closure of lunch break, when Natalie walked into her cabin, she saw Brian engrossed in deep thought. Natalie’s intuition told her that Brian had stumbled on to something concrete as she knew his pensive, transfixed expression only too well.

Hiding her excitement, she asked Brian in an offhanded manner, ‘Anything interesting yet?’

‘Yes and no. The encrypted documents turned out to be lists of candidates who had attempted the tests for government jobs for Graduate Recruitment programs, Aus Railways, etc. You know, psychometric tests, aptitude and personality tests, interviews etc.’ informed Brian.

‘Any links between the spreadsheet and the ones you decrypted?’ asked Natalie knowing there is more to come.

Brian lowered his voice before he continued, ‘Well, the thing is I found two lists. One with the correct scores of candidates who applied for various positions in government sectors and the other with corrected scores.’

Clearing his throat, he carried on, ‘The names of the candidates had the Senators and MPs names we found earlier on the spreadsheet across theirs, every single one. I am sure we are on to a mega scam here.’

‘So, you think the transactions might be bribes from the candidates to the politicians, who would later invest it in properties?’ inquired Natalie with her eyeballs protruding from its sockets.

Brian let out a low whistle in affirmation. He declared, ‘I will get my girlfriend on to this.’

Observing the puzzled expression on Natalie’s face, he explained, ‘You know Ashley is a TV journalist. We can ask her to do some investigative journalism for us and she gets a good cover story in return. What do you say?’

Natalie’s frown cleared, and her face broke into a beaming smile. Before she breezed out of Brian’s cabin she stated, ‘I will keep Greg updated about your findings, if you don’t mind.’ Brian waved his hands showing she could and resumed his project work.

At 5:00 pm Natalie saw Brain collect his jacket hanging on his chair and leave the cabin twirling his keys on his forefinger. He was in a hurry and Natalie had no difficulty in placing her finger on the reason. She took a few minutes to pack her things into her handbag, went to the washroom for some final touches before she descended the escalator to the train station. Finding a car park in the mornings was so problematic she avoided driving to work and preferred the 45 minutes train travel over the luxuries of her Mercedes.

When Natalie reached home, she showered and changed to go to a party next door in a quiet neighbourhood at 6:30 pm. She lived on the 4th floor of a new block of six-storeyed apartments and was sociable with the Smiths family next door whose older daughter had turned twenty that day. The noise of the blaring music and the champagne she had consumed caused a dull headache that seemed to increase the longer she spent in that electrifying atmosphere. Natalie excused herself and reached her apartment in seconds only to collapse on the bed and drifted off to a deep sleep.

The first rays of warm sunlight that filtered through the open venetian blinds awakened Natalie, who groped for her TV remote. With an effort, she switched on the television and registered her vision on the 52-inch flat screen TV mounted on the wall opposite her bed. She wondered why she was staring into a photograph of her co-worker Brian’s girlfriend, Ashley. She sat bolt upright in her bed and listened in horror to the news anchorwoman, Georgie Gardner, report on Channel 9 about the mysterious circumstances in which a hotel staff had found the body of a TV journalist Ashley Richardson last midnight in a hotel room. Natalie could not control her body from trembling. Tears rolled down her cheeks when the camera zoomed in on Ashely’s face. Her eyeballs had receded into her forehead and the corner of her mouth had remnants of froth. A horrible feeling descended on her when she recalled the previous day’s occurrences.